Napoleon Complex explores weather modelling algorithms used by global catastrophe insurance, speculating on the consequences of their creation at a series of different scales from the economic to the intimate. The project is influenced by Weird genre fiction, in which the protagonists are often the subjects of systems and phenomena which are too large or complex for them to fully comprehend.

In the central film an actuarial scientist appears in a disorienting series of scenes which swing between the investigative, the fictional and the interpersonal. Through a form of roleplay that imitates the repetitive simulation used in weather modelling algorithms, the details of his profession become complicated by unexpected consequences and tangential personal information, ultimately calling into question the objective, impartial status that algorithmic modelling and scientific simulation often hold. 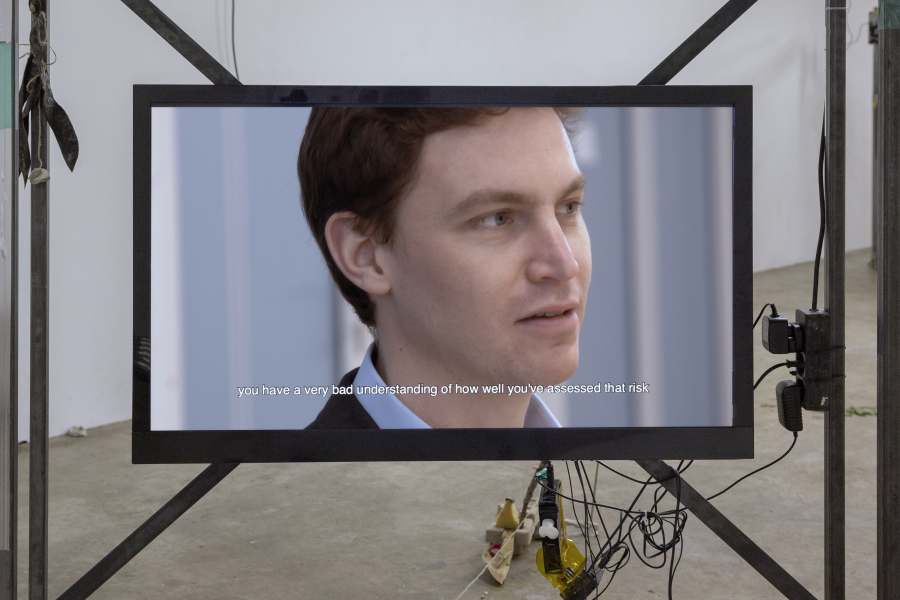 To emphasise the film’s unnatural nature, a CGI Emperor Moth hatches and is drawn towards the light of the film set - the false eyes on its wings mutating and animating as the relationship between the weather models and their consequences become stranger and more indistinct. While only glimpsed briefly in the central film, the life cycles of the moth are displayed on the smaller screens installed in this installation - proposing an alternative protagonist to the film’s narrative.

Kemp is an alumni of the School of the Damned, UK, and the Dirty Art Department, NL, and currently a research fellow at the Sandberg Instituut, NL. Selected shows include Dark Matters, CorridorPS, Amsterdam NL, Me Gustas Pixelad, La Casa Encendida, Madrid ES, they swore it could talk to dogs, Bageion Hotel, Athens GR, and Blood from a Turnip, EYE filmmuseum, Amsterdam NL. He is QUAD’S Associate Artist 2020 and has been selected for our UK<>China Artist Residency Programme 2021, in partnership with Tank Loft, 501 studios, XuArtspace in Chongqing.