We are now bordering on 3 months of doing these streaming selections and when we launched this we did so with a free 3 month offer from the good folks at MUBI. Now those free three month trials are nearing the end so I thought we might try and maximise that offer before it ends. MUBI have introduced a Library option to their offer where you can stream a whole host of other titles besides the curated 30 film selection. So we’re doing a deep dive into that this week!

To start your free 3 month trial of MUBI click here

Instead of selecting one feature film to watch, I recommend exploring the free section of the BFI player. There is a wealth of free archive film from the past 120 years.

Black Britain On Film
Especially topical and relevant explore footage of Black Britain from 1902 to more recent history. Striking, illuminating and sometimes surprising images of black culture, community and characters, spanning over a century of British film and TV.

Spotlight On Key Workers
A salute to the vital workers who keep our essential services running in bad times – and all the time.

LGBT Britain
This colourful and challenging collection explores screen representations of lesbian, gay, bisexual and transgender lives over the past century. 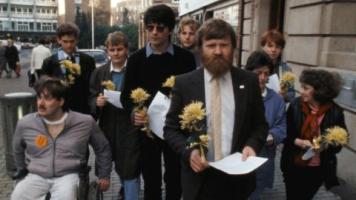 Keep Fit
Let’s get physical! With over a century of exercise on film, this collection offers some high intensity viewing.

Woman At War (2018)
Fifty-year-old Halla seemingly leads a quiet existence. However, she is actually a radical eco-activist who has declared a one-woman-war on the local aluminium industry. In the midst of her environmental crusade, Halla receives the surprising news that her application to adopt a child was approved. Magical realism meets dark humour in this fable-like eco thriller. 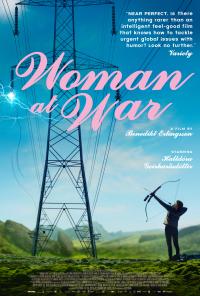 The Souvenir (2019) – MUBI Library
Julie is a young film student struggling to find a firm direction in life when she meets Anthony. An intense romance blossoms between them, but as the relationship develops it becomes clear that Anthony is not being completely honest, and that this could have devastating consequences for them both. Joanna Hogg direct astounding performances from Honor Swinton Byre, her mother Tilda and Tom Burke.

The Staggering Girl (2019) – MUBI Library
Triggered by a stranger’s secret confession, Francesca returns to her childhood home in Italy to convince her ailing mother to follow her to New York. As daughter confronts mother, ghosts of

Francesca’s youth return in a whirlwind of pain, memory and fulfilment. Italian director Luca Gugadagnino (Call Me By Your Name, Suspiria) delivers a new film unfolding with the mysteriousness of a dream, sumptuous and elusive.

Under The Silver Lake (2018) – MUBI Library
When aimless slacker Sam wakes up one morning to find his beautiful neighbour Sarah has vanished without a trace, he embarks on a quest across the city to find her. A delirious neo-noir mystery about the murkiest depths of scandal and conspiracy in the Hollywood Hills. 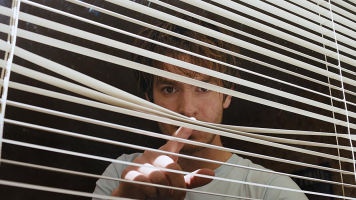 Carousel (1956)
Billy Bigelow, a vagabond and good-for-nothing carnival barker, finally settles down with a first-class woman but gets stabbed to death while committing a robbery. Many years later, an angel offers him the chance to return to Earth for just one day to make things rights for his miserable wife and daughter he never had the chance to meet. Classic musical based on the stage play by Rogers and Hammerstein.

Don’t Take Me Home (2017)
Wales haven’t qualified for a major football tournament since 1958. When the young gifted national manager, Gary Speed, tragically took his own life in 2011, a youthful side and nation was left devasted. Qualification felt further away than ever and less important. Fast forward to 2015, and spurred on by the enduring memory of the late manager, Wales have qualified for Euro 2016, But how will they fare?

The Hurt Locker (2008)
Bagdad 2004. A maverick member of a US military unit tackling IEDs and bomb disposal aggravates his team-mates. Powerful Oscar and BAFTA winning drama.

What We Do In The Shadows (2014)
Viago, Deacon and Vladisav are vampires who are finding that modern life has them struggling with the mundane – like paying rent, keeping up with the chore wheel, trying to get into nightclubs and overcoming flatmate conflicts. Taika Waitit and Jermaine Clement’s hilarious vampire comedy spawned an equally funny television series. 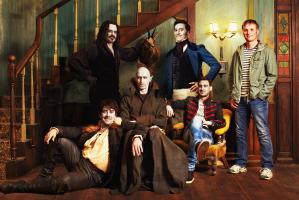 Adventure Films
While it is not quite as vertiginous as watching on the big screen, you can see a whole range of outdoor adventure films online for free. The Banff Mountain Film Festival have recently shared a list of more than 100 adventure films. Check out ( https://www.docdroid.net/lR9Mzcw/banff-movie-festival-pdf ) for a curated list.

Joy (2016)
Joy is the story of a family across four generations and the woman who rises to become the founder and matriarch of a powerful family business dynasty. David O’Russell (The Fighter, I Heart Huckabees) reunites Jennifer Lawrence and Bradley Cooper after their Oscar winning Silver Linings Playbook and American Hustle collaborations.

Amy (2015)
From BAFTA award-winning director Asif Kapadia (Senna, The Warrior), Amy tells the incredible story of six-time Grammy winner Amy Winehouse – in her own words. Featuring extensive unseen archive footage and previously unheard tracks, this strikingly modern, moving and vital film shines a light on the world we live in, in a way that very few can. 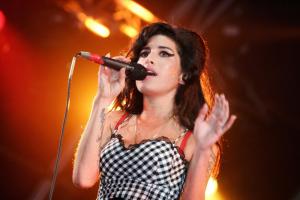 The Square (2017)
Academy Award nominee for best foreign language film. A respected museum curator, Christian’s next show “The Square” is an installation reminding people of their role as responsible human beings. But the museum’s PR agency creates an unexpected campaign that sends Christian into an existential crisis.

Embrace Of The Serpent (2016)
Through parallel story threads set 40 years apart, this absorbing odyssey follows two Western scientists who travel deep into the Amazon jungle looking for a rare plant that possesses healing powers, with enigmatic shaman Karamakate as their guide. 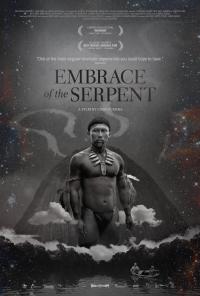 Popeye The Sailor Meets Sinbad The Sailor (1936)
Sinbad the Sailor proclaims himself to be the greatest sailor in the world, a claim which is challenged by Popeye’s arrival to his island with Olive Oyl and J. Wellington Wimpy in tow. Sinbad, with the help of his bird Rokh, treats Popeye to a series of challenges to prove his greatness.

Madeline’s Madeline (2018) - MUBI Library
Sixteen-year-old Madeline has become an active member of an experimental theatre troupe. When its ambitious director pushes Madeline to weave her rich interior world and her troubled relationship with her mother into their collective art, the lines between performance and reality begin to blur. A sensorial and immersive trip into a teen’s psyche starring Miranda July, Molly Parker and standout newcomer Helena Howard. 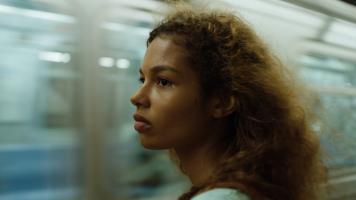 Le Havre (2011) – MUBI Library
In the French harbour city of Le Havre, fate throws young African refugee Idrissa into the path of Marcel Marx, a well-spoken bohemian who works as a shoe-shiner. With innate optimism and the unwavering support of his community, Marcel stands up to officials doggedly pursuing the boy for deportation. Deapan master Aki Kaurismaki returns to France for this sunny and socially minded utopian parable.

Hana-Bi (Fireworks) (1997) – MUBI Library
Actor and auteur Takeshi Kitano wrote and directed, edited and starred in this unusual crime drama. He plays Nishi, a policeman whose emotions seem to run on extreme paths – either quiet contentment or brutal rage. In order to do right by those he loves, he’ll have to make some questionable decisions. Winner of the Golden Lion at Venice in 1997 it is one of Kitano’s best.

Night Moves (2014) – All4
Jesse Eisenberg stars alongside Dakota Fanning (Ocean’s 8) and Peter Sarsgaard (Garden State) as three radical environmentalist that plan to execute a thrilling protest that will ultimately change all their lives. 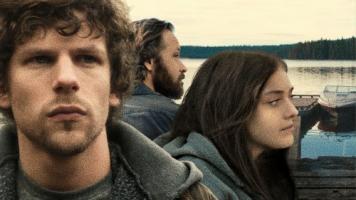 Filmworker (2017) – All4
Leon Vitali was a rising British television actor when Stanley Kubrick picked him for the role of Lord Bullington in Barry Lyndon. That first encounter with the famed auteur proved decisive - he swiftly resolved to devote the rest of his life working for the director, this time behind the scenes, and took on just about every job available: casting director, acting coach, location scout, sound engineer, color corrector, A.D., promoter, and eventually restorer of Kubrick's films. Tony Zierra's affecting documentary Filmworker enthusiastically recounts Vitali's days with the notoriously meticulous, volatile and obsessive director. The experiences brought both tremendous sacrifice and glowing pride. Filmworker celebrates the invisible hands that shape masterpieces, reminding us that behind every great director, there is a Leon Vitali.

The Deadly Companions (1961) - My5
Director Sam Peckinpah’s first feature is a strong tale of revenge and redemption. Yellowleg (Brian Keith) escorts Kit Tilden (Maureen O’Hara) through hostile Apache territory to bury her son. A couple of shady characters, Turk (Chill Wills) and Billy Keplinger (Steve Cochran), are recruited to ride along – for reasons only Yellowleg knows. 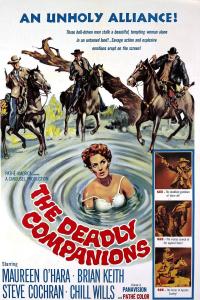 Umberto D (1952) – Mubi Library
Set during Italy’s postwar economic boom, an elderly man living alone with his dog is determined to maintain his self-respect whilst suffering through poverty. A solemn entry part of the Italian neorealist genre.