BBC iPlayer does have a great and varied selection of films refreshed each week.

All4 and My5 have a surprising range of films too.

BUT… for the real trash lover, Amazon Prime is your best friend. There for you when you’re feeling low with a sword and sandal epic, there for you if you’re fancying viddying some of the ultra-violence. Amazon Prime is the friend that knows how the trash fan is feeling and has a host of trash classics to delight!

So, we are taking a full Scrooge McDuck style swan dive into the trash that is the bowels of Amazon Prime.

Friday – Something For The Weekend?

Saucy British Comedy to kick off your weekend. The first in a three-film series (Private Eye and Plummer’s Mate – if you’re interested), and a huge box office smash at the UK Box Office in 1976. Featuring a host of British character actors including Ilkeston’s Robert Lindsay, Diana Dors, Stephen Lewis, Ian Lavender and Brian Wilde, it probably says more about the state of the British Film Industry than it does about the content that it could attract quality actors for a cheeky sex comedy.

Over in America in the wake of National Lampoon’s Animal House (1978), Fast Times At Ridgemont High (1982) and perhaps more accurately here Porky’s (1981), they were having their own boom in sex comedies. This independent production stars Linda Shayne (who also wrote the screenplay) brings together all the tropes of the genre while also paying homage to countless B movies from the Drive-In era of cinema. 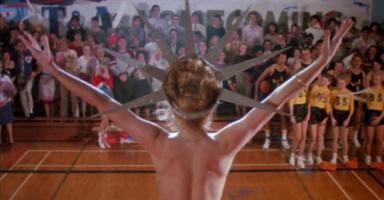 South Park creators Matt Stone and Trey Parker’s preoccupation with Mormons didn’t begin with the hit musical The Book Of Mormon. Oh no, it started right here with this comedy set in the world of pornography. Joe Young (Parker) is a simple young man just trying to spread the word of the Book Of Mormon. How he gets caught in the world of sex superhero Orgazmo is something you’ll have to see for yourself… 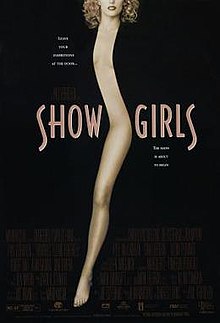 When the announcement that John Millius was making a Conan movie in 1979, independent production went into overdrive to ride the wave of success. As it was, Conan The Barbarian was

finally released in 1982 many of the independent cash in productions were released ahead of Conan! Ator, The Fighting Eagle is Joe D’Amato’s cash in quickie. Ator, son of Torren learns of his heritage and his destiny: To defeat the Spider King! He goes to the Temple of the Ancient one to avenge the deaths of his fellow villagers and rescue his sister from the evil Dakkar (played by Dakar with one k) and his spider cult. With Miles O’Keeffe stars as Ator alongside D’Amato regular and exploitation film legend Laura Gemser (Black Emmanuelle). 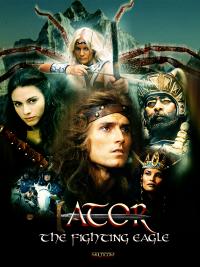 Fantasy gets animated in Ralph Bakshi’s (Fritz the Cat) Fire And Ice. Based on the paintings and other artwork of legendary artist Frank Frazetta, Bakshi animates the epic tale of good King Jarol and his people as they defend the city of Fire Keep from the evil, encroaching forces of Nekron, the Ice Lord. 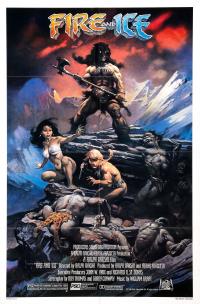 Female gladiators fight to the death. Inspired by the story of Spartacus, follow the adventures of a bevy of slave girls (I believe bevy is the correct collective noun) who, upon finding themselves thrust into the gladiator ring, mount a vicious rebellion to fight their way to freedom. Margaret Markov reunites with her Black Mama White Mama co-star Pam Grier for the ancient Rome set sword swinging romp.

Don Coscarelli’s (Phantasm, Bubba Ho-Tep) fantasy franchise is off to a running start in this sword-and-sorcery fantasy about a young man Dar (Marc Singer)’s search for revenge. Armed with supernatural powers that allow him to communicate with the animals (kind of like Doctor Doolittle but with more muscles) Dar hunts down the murderers of his King Father. With Tanya Roberts (A View To A Kill) and Rip Torn (Men In Black).

All twelve episodes of this serial classic. The U.S. finds itself under attack from a mysterious force that can wipe out entire military bases and industrial complexes. Commando Cody (aka Rocketman) surmises that the Earth is coming under attack from the Moon. He flies there and confronts the Moon’s dictator, Retik, who boldly announces plans to conquer Earth and then move the Moon’s entire population there using spaceships!

Godzilla never looked this good as Danny Lee plays the kung-fu fighting action hero Inframan. Inframan battles a wild meageries of rubber-suited monsters and beasties that is a delight to behold. Place tongue firmly in cheek. 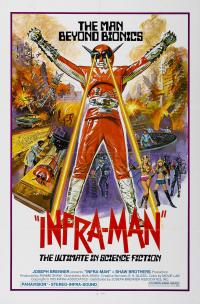 A powerful cosmic force is turning Earth women into killer bees who kill men by wearing them out…in the bedroom! When a scientist from the Brandy research laboratory is found dead in a motel, the government sends Agent Neil Agar (William Smith) to investigate the mysterious deaths. He suspects that the deaths may be related to some experiments of Dr. Susan Harris, who is researching bees! Labelled by esteemed film critic Roger Ebert as “the best schlock soft-core science fiction movie since maybe “The Vengeance Of She.” 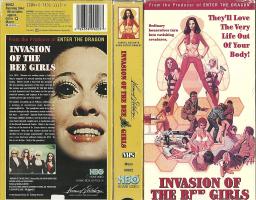 The Stuff is a new desert craze taking supermarket shelves by storm. It’s delicious, low in calories and – better still – doesn’t stain the family carpet! Young Jason seems to be the only one who doesn’t love The Stuff – in fact, he won’t go anywhere near it, after having seen the pudding crawling around his fridge! What’s more, everyone who eats The Stuff has started acting really weird. Now teaming up with wise cracking industrial saboteur “Mo”, Jason must put a stop to The Stuff and the organisation behind it or face a gooey, gloopy demise. 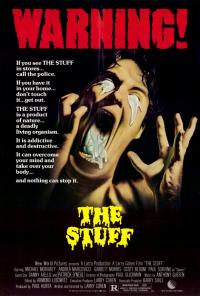