How We Make Meaning features two solo but connected exhibitions by artists Memo Akten in QUAD Gallery one and Mimi Ọnụọha in QUAD Gallery two. Both artists explore aspects and the meanings of Artificial Intelligence (AI) - particularly in relation to the gathering and use of data, machine learning and how humans/machines input and interpret data and how they view the world in scientific, spiritual and deeply personal ways.

MEMO AKTEN
Memo Akten (Turkey) is an artist, musician, researcher and philomath. His work and research in Artificial Intelligence / machine learning looks at collaborative creativity between humans and machines. His work Deep Meditations: A brief history of almost everything in 60 minutes on display at QUAD, part of How We Make Meaning, is a large-scale video and sound installation; a monument that celebrates life, nature, the universe and our subjective experience of it. The work invites us on a spiritual journey through the slow, meditative, continuously evolving images and sounds, told through the imagination of a deep artificial neural network. We are invited to acknowledge and appreciate the role we play as humans as part of a complex ecosystem heavily dependent on the balanced co-existence of many components. The work embraces and celebrates the interconnectedness of human, non-human, living and non-living things across many scales of time and space – from microbes to galaxies.

What does love look like? What does faith look like? Or ritual? Worship? What does God look like? Could we teach a machine about these very abstract, subjectively human concepts? As they have no clearly defined, objective visual representations, an artificial neural network is instead trained on our subjective experiences of them. Hundreds of thousands of images were scraped (i.e. autonomously downloaded by a script) from the photo sharing website flickr, tagged with various relevant words to train the neural network. The images seen in the final work are not the images downloaded but are generated from scratch from the fragments of memories in the depths of the neural network. Sound is generated by another artificial neural network trained on hours of religious and spiritual chants, prayers and rituals from around the world, scraped from YouTube. Memo Akten works with emerging technologies and computation as a medium, to create moving images, compositions, large-scale responsive installations and performances. Fascinated by trying to understand the nature of nature and the human condition, he brings together fields such as biological and artificial intelligence, computational creativity, spirituality, ritual and religion. www.memo.tv

MIMI ỌNỤỌHA
Mimi Ọnụọha (USA/Nigeria) is an artist and researcher whose work in relation to AI highlights the social relationships and power dynamics behind data collection. Mimi is exhibiting a series of works in QUAD Gallery two as part of How We Make Meaning. Us, Aggregated 3.0 is the third and final work in the Us, Aggregated series and builds off of the first and second thematically but takes the form of a video. Us, Aggregated 3.0 uses Google’s reverse-image search algorithms to hint at questions of power, community, and identity. The work presents an expanded collection of photos from the artist's family's personal collection set alongside images scraped from Google's library that have been algorithmically categorised as similar. Viewed together, the images evoke a sensation of community and similarity that belies the fact that the subjects are randomly assorted, a manufactured aggregation of “us”.

The Future Is Here! examines the process of dataset creation. In order to extract value from information, tech companies and researchers increasingly employ machine learning. This process requires huge quantities of data which have been labelled and tagged according to specific criteria. For example, in the case of machine vision, these systems have to be fed with massive quantities of manually annotated photographs to be able to identify patterns.

This 'human work’ is usually crowdsourced through companies such as Mechanical Turk or Figure Eight who employ huge numbers of globally distributed workers who are paid small amounts to annotate the datasets that companies upload to their platforms. Without this tagging, labelling, and annotation work, the bulk of machine learning as it unfolds today would simply not be possible.

Consisting of a series of images and stylised interpretations of the spaces where top contributors on Figure Eight carry out their work, The Future Is Here! teases out the myth and reality of the labour behind machine learning (originally commissioned for The Photographer’s Gallery). 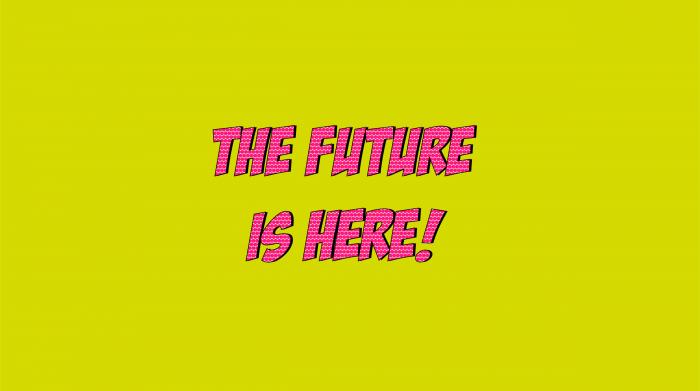 The work In Absentia 2.0 is based on an event in the early 1900s, when sociologist W.E.B. Du Bois was asked by the US government to conduct research on black rural life in Alabama. Using interviews with over 20,000 residents, he compiled a report filled with text, maps, charts, and tables of data. After months of work, the report was never published.

Ọnụọha asks what happens when data is made to disappear by those who want to obscure the reality of racism and power. Across sensory registers, In Absentia re-circulates fragments of Du Bois' famous report as a meditation on suppression and distortion.

Borrowing language and visuals from Du Bois' work, In Absentia subverts multiple media forms—data visualisation, audio installation, print booklet—to complicate assumptions about how to interpret data, in both its presence and absence. "How many find their work halted not by lack of data, but by an unwillingness to hear?" Ọnụọha asks. And what is our responsibility both to listen and advocate for racial justice?

Written in 2018 by Mimi Onuoha and Mother Cyborg (Diana Nucera), A People’s Guide to AI is a comprehensive beginner's guide to understanding AI and other data-driven tech. The guide uses a popular education approach to explore and explain AI-based technologies so that everyone—from youth to seniors, and from non-techies to experts—has the chance to think critically about the kinds of futures automated technologies can bring.

The mission of A People’s Guide to AI is to open up conversation around AI by demystifying, situating, and shifting the narrative about what types of use cases AI can have for everyday people. Gallery visitors are invited to download a digital copy of the book in the gallery, via a QR code.

Mimi Ọnụọha’s multimedia practice uses print, code, installation and video to call attention to the ways in which those in the margins are differently abstracted, represented, and missed by sociotechnical systems. www.mimionuoha.com